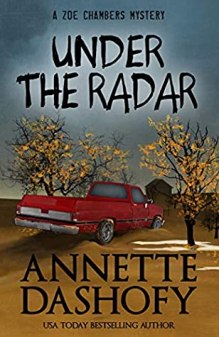 With a full-time job with the Monongahela County EMS and a “part-time gig as deputy coroner,” Zoe Chambers has reason to be on the scene when bad things happen. In Annette Dashofy’s Under the Radar, murders abound. Zoe’s friend from high school, the much bullied Horace, turns himself in for the murder of long-time tormentor Dennis Culp. Did Horace snap under the continued violent harassment?

Under the Radar contains lots of twisty paths in the criminal investigations with several major surprises along the way. In addition to murder and burglaries, there are personal issues as Zoe plans her wedding to Vance Township Police Chief Pete Adams. She somehow manages to become involved in a deadly scenario while trying to track down a half brother she has never met. There is a little comic relief via Zoe’s interactions with her mother Kimberly and a “girls’ road trip.” Local politics works its way into the story as Zoe’s boss has to compete for his job, and the election results could also affect Zoe’s employment.

The books in this series are page turners and Under the Radar is no exception.

I would like to extend my thanks to Edelweiss and to Henery Press for giving me the opportunity to read this book in exchange for an honest review.

Notes: #9 in the Zoe Chambers Mystery Series, but can be read as a standalone because the mystery is the strong part of the plot and much background information is supplied at the beginning of the book.

Pete didn’t need to tell Horace to stay close. If he’d been any closer, he’d have been in Pete’s back pocket.

He hated to wish ill on anyone, but he hoped someone requested assistance or needed an officer for something—anything—minor. Paperwork sucked.

Kimberly had two large suitcases, a massive carry-on, and what Zoe guessed was a makeup bag big enough to stock the Dior counter at a department store.