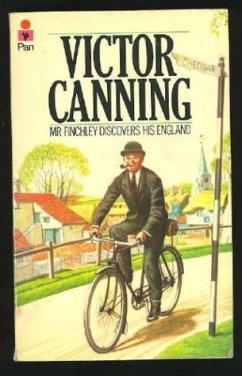 Edgar Finchley, a clerk in a law firm, has not had a vacation in ten years when his new boss surprises him with a three week holiday. This mild-mannered, middle aged bachelor anticipates trading his typical, longstanding daily schedule for a different holiday routine, but is surprised to find himself wrapped up in a series of adventures.

Victor Canning’s Mr. Finchley Discovers His England was originally published in 1934 before WWII when the author was twenty-three. A best seller upon publication, it is a humorous work reflective of a more innocent time and makes a fun read. I enjoyed all of Finchley’s exploits. Despite the light-hearted nature of the book, the character of Finchley develops as he finds courage and flexibility he never knew he had. This book is full of well written, vivid descriptions and many British terms. I enjoyed learning words such as “roach” (a type of fish)  and “rean” (a varian of reen, an irrigation ditch). Mr. Finchley Discovers His England is a delight to those who enjoy an author who can craft superlative descriptions and has an extensive vocabulary.

I would like to extend my thanks to netgalley.com and to Ferrago for giving me the opportunity to read this book in exchange for an honest review.

2. There is a chapter which devotes itself to a cricket match This part of the book  would be more interesting to a reader who is familiar with the game and terminology.

The sun tipped the edge of the hills in a blazing tiara and every copse and thicket, each barn and cottage, sprang into a bold relief, white wall vivid against chestnut green, and a church clock, black and gold against the grey of the stones.

…he came slowly to see what until now he had never realized; that danger, the wonder of the unexpected, the exhilaration of living and not knowing what one would be doing or where one would next be were the only thing that gave colour to life.

He was beginning to see that McGrath was the type of man who bullied and stormed at people—and was surprised when they accused him of losing his temper.

By lghiggins in Book Review, Fiction, Humor on June 25, 2019.
← Flower Power Trip–flowers at the heart of a mystery The Ministry of Ordinary Places: Waking Up to God’s Goodness Around You →