Much Ado About Murder–Shakespeare in a Civil War era setting

Much Ado About Murder 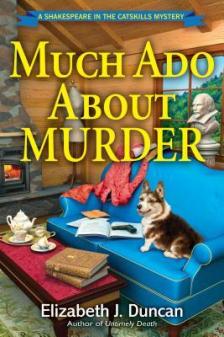 England comes to the U.S. in Much Ado About Murder. Charlotte Fairfax is a costume designer formerly with the Royal Shakespeare Company. Audrey Ashley is an actress from a famous English dramatic family; she insists on a particular English director. Set in the Catskills, a production of Much Ado About Nothing is anticipated to draw crowds of tourists to help sustain the town and local hotel. Add in a few Corgis and a lot of tea to round out the British ambiance.

Unfortunately, trouble plagues the production with conflicts, injuries, a murder, and lots of suspects. Charlotte and her wealthy friend Paula, chairperson of the theater board, bear major responsibilities for ironing out difficulties and investigating the murder. Charlotte has support from her boyfriend Ray, the chief of police.

I enjoyed this cozy mystery with its interesting characters and setting. As a drama fan, I particularly appreciated that focus and found that it was integral to the plot rather than contrived. Reading about the difficulties of staging a professional production on a restricted budget in a more remote location got my attention and added an element of fun to the mystery.

I would like to extend my thanks to netgalley.com and to Crooked Lane Books for giving me the opportunity to read this book in exchange for an honest review.

Notes: #3 in the Shakespeare in the Catskills Mystery Series, but worked well as a standalone for me

Audrey shook her head as the server placed a generous slice of apple pie, its latticed crust golden and flaky, warm, cinnamon-laced chunky apple filling oozing onto the plate, in front of each diner. It was accompanied by scoops of homemade French vanilla ice cream and slices of mature cheddar cheese.

Theater rehearsal rooms are almost always closed to outsiders. They’re meant to be safe places where actors can try on a role and wear it for an hour or a day, experiment,  do anything and everything to find the heart and voice of a role, make mistakes, indulge in whimsy and nonsense, until they understand where their character has come from and what he seeks and why he wants it. They do this by playing off other actors, and gradually, as they work out the mechanics of the play and the technical aspects, it comes together as the words are lifted off their pages and take on a life of their own.

By lghiggins in Book Review, Cozy, mystery on November 30, 2017.
← The Boyfriend Swap–great beach, plane, or cozy afternoon A Deadly Eclair–weak in the deduction department →