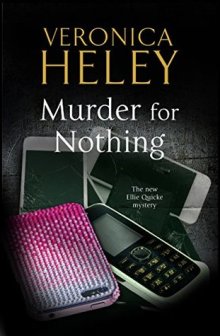 This is the second book for me to read in Veronica Heley’s Ellie Quicke Mysteries, and I am sold on the series. Perhaps it is a reflection of my own age, but I like that Ellie Quicke, the main character, is a grandmother and she solves crimes using her brain rather than a lot of running around. I like that she is unabashedly a woman of faith, but does not see herself as perfect, nor is she a prude. She displays courage and insight.

The other characters in the book are what I would call a mixed bag. Some are extremely evil, some are really nice, and a number are common folk just trying to do the best they can given their circumstances.

Ellie is caught in the middle of a number of conflicts, all of which seem to center on a spoiled young lady, Angelique, who has gotten herself in trouble with her ambitions to marry a rich man and live a lifestyle she can not currently afford. Running free and easy through the money of others, Angelique can turn on charming tears at the drop of a hat. She finds herself in over her head, however, when she hosts a rave party at her cousin’s flat while he is on his honeymoon.

I enjoyed Murder for Nothing from start to finish and found myself not wanting to put it down, not because it was so suspenseful but because I wanted to watch the mystery and its solution unfold. Although there are many differences, Heley’s choice of heroine and her focus on detection through conversation and thought calls to mind the unparalleled Agatha Christie.

I would like to extend my thanks to netgalley.com and to Severn House for giving me the opportunity to read this book in exchange for an honest review.

Notes: #17 in the Ellie Quicke Mystery Series, but works well as a standalone

I try, however difficult it may be, to do the right thing and not to compromise. And I bet I sleep more soundly than you do.

She got it. He was feeling guilty. If he would talk about it, she could help him. If he remained mum, the guilt was going to work inwards and poison his whole system.

She had indeed gone for the safe bet in marrying her first husband, only to find out that he had a need to dominate everyone in sight. Yes, it had been a successful marriage in worldly terms, but only because she’d made herself into a doormat for him.

By lghiggins in Book Review, mystery on November 18, 2017.
← If My Moon Was Your Sun–the Great Forgetting Smoke and Mirrors–P.T. Barnum’s American Museum →