Home » Book Review » To Kill a Hummingbird–the middle is good

To Kill a Hummingbird–the middle is good

To Kill a Hummingbird 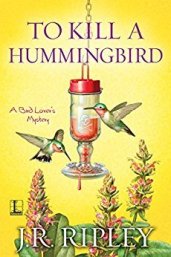 I enjoy word play so I was immediately attracted by the title of J.R. Ripley’s To Kill a Hummingbird. This is the fourth book in his Bird Lover’s Mystery Series with two more waiting in the “wings.” This cozy mystery gets off to a slow start with rather stilted dialogue. Ripley spends the requisite amount of time introducing his characters and setting the stage, but the story just seems to drag as the former professor of Birds and Bees shop owner, Amy Simms, arrives in Ruby Lake, North Carolina, for a book signing. The book rambles on for four chapters with the only suspense being the alcoholic state of the professor.

The author includes some interesting information on hummingbirds, but often the inclusion seems forced. I do think, however, that this is a book bird aficionados will really enjoy. My opinion of the book grew steadily more positive as the plot increased in complexity and as the characters interacted with each other. There were interesting twists to the plot as Amy and her boyfriend Derek try to determine who is responsible for several murders. Unfortunately, after the mystery is solved, the author attempts some comic relief which is both unsuccessful and unwanted.

I would like to extend my thanks to netgalley.com and to Kensington Books (Lyrical Underground) for giving me the opportunity to read this book in exchange for an honest review.

“Sometimes when you see a hummingbird hovering over a flower, it isn’t because it’s about to feed on nectar—it could very well be that the bird has spotted a tasty spider or even an insect trapped in a spider’s web.”

By lghiggins in Book Review, Cozy, mystery on October 12, 2017.
← If You Give a Man a Cookie–spousal humor in parody format Room for Doubt–does the motive justify the crime? →