Murder by the Book–rare books

Murder by the Book 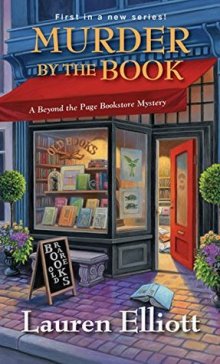 If you are looking for an interesting cozy mystery with lots of crimes and suspects, you will find it in Lauren Elliott’s Murder by the Book. Addison Greyborne, with a background as a researcher of rare books, inherits her aunt’s huge house and large collection of books. Some of the residents of the small town where she decides to open a bookshop are not particularly welcoming, but she finds a friend in Serena who owns the tea shop next to Addie’s bookstore and in Serena’s brother Marc, the police chief.

Addie believes her research skills are similar to those needed for a murder investigation, so when Selena is arrested for murder, Addie decides to get involved. Although I enjoyed the story, there are parts of it that just don’t seem plausible. Addie personally, her shop, and her home are targeted numerous times without anyone being able to identify the mischief makers or their motives—although mysterious vehicles are seen many times. There are also several deaths tied into the plot and a number of suspicious newcomers to the small town that no one suspects until it is too late. The storyline contains too many characters dealing in rare books one way or another for that not to be the motive. Secret compartments, a fun device, abound. Unfortunately that device is overused as is the irritating tendency for other characters to tuck a strand of hair behind Addie’s ear. Serena also overplays her interest in Addie and Marc’s relationship while she is still under suspicion for murder.  In addition, I have to wonder at the number of customers the bookstore maintains day after day and at the ease with which both Addie and Selena can leave their shops unattended or closed any time they feel like it. On the positive side, there are gems of information about rare books tucked into the pages of this cozy. So, recommended? Yes. A terrific cozy? No, but since this is the first in the series, I am willing to give it another try when the next one is published.

I would like to extend my thanks to netgalley.com and to Kensington Books for giving me the opportunity to read this book in exchange for an honest review.

Notes: #1 in the Beyond the Page Bookstore Mystery Series

By lghiggins in Book Review, Cozy, mystery on November 6, 2018.
← Lover Come Hack–mad for mod Killed on Blueberry Hill–murder at the Blueberry Blowout →