I had a blast reading Juana and Lucas: Big Problemas. Author and illustrator Juana Medina, like the main character in her book, is from Bogotá, Columbia. I know some bilingual teachers who would be uncomfortable with the code switching in this book; I love it. For me, inserting some Spanish words in places where the context or illustrations make the word meanings plain adds color and flavor to this chapter book written mainly in English.

Juana, her Mami, and her dog Lucas have an almost perfect life together. They have a routine and a support group of family and friends that keep them happy. Things start to change when Mami gets a new hairstyle and starts wearing more perfume. The new man in Mami’s life is Luis, an architect. Juana likes him but she doesn’t want things to change, and she doesn’t want Mami and Luis to get married. We learn about Juana’s dad who passed away and about the sadness of not having a father. We share in the characters’ preparations for the wedding and the move. All of this is portrayed sensitively, but also with humor. The illustrations fit the book well.

I learned about a favorite Columbian soup, ajiaco. It is creamy and made of several types of potatoes that cook to various consistencies. It has corn on the cob, capers, chicken, sour cream, and herbs, and is topped with a slice of avocado. The other unfamiliar food to me is chocolate con queso. This special treat consists of hot chocolate with chunks of cheese—chihuahua, queso fresco, or mozzarella. Evidently it is a delight of sweet and salty and is served with bread. I’m ready for a trip to Columbia!

I would like to extend my thanks to netgalley.com and to Candlewick for giving me the opportunity to read this book in exchange for an honest review. 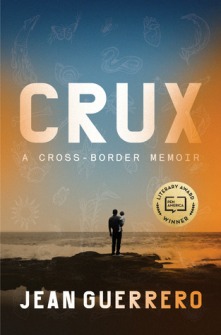 Crux: A Cross-Border Memoir attracted my attention because I live part of each year in Mexico and part in New Mexico, U.S.A.  After five years of cross-border experiences, I have such mixed feelings because I love the U.S. with its fairly balanced mixture of freedom and order, but I also have enjoyed the kindness and diverse cultures of the Mexican people.

Crux, however, addresses cross-border experiences on a whole different level. The author Jean Guerrero is the daughter of a Puerto Rican mother and a Mexican father. Guerrero survives a dysfunctional childhood to become a journalist. This book is an effort to understand herself through an attempt to understand her father, a brilliant man who at various times is addicted to drugs, and alcohol, believes the C.I.A. is performing experiments on him, and is schizophrenic according to her mother, a medical doctor.

Guerrero longs for her father’s affection. She received it when she was very little, but most of her memories are of an unpredictable and often hateful man who occasionally dropped in and out of her life. Guerrero tries to win her mother’s affection and approval through scholastic achievement. In the process of becoming an adult, she is always introspective but she experiments in dangerous arenas—drugs at raves, trips to dangerous areas of Mexico, bad boys and sexual exploration, and the occult. The occult is tied in with her heritage as she had a great-great grandmother in Mexico who was a healer and diviner and other Mexican relatives who were involved in similar activities.

Crux contains a lot of family stories: Guerrero’s own memories, interviews with her father and his mother, and trips to Mexico to discover the truth of her roots. It also includes some of her philosophical thinking at various times in her life as well as information from her neurological studies in college. She minored in neurology as a part of her efforts to understand her father’s schizophrenia and her genetic predilection to become schizophrenic herself.

As a cross-border tale, Crux is sprinkled with Spanish, some of it translated, some not. I am not fluent in Spanish, but I appreciated the authenticity added to Crux by including Spanish. I do wonder, however, if understanding the book would be affected by a reader’s not being able to translate as they read. One could, of course, use an online Spanish dictionary to help, but that would definitely interrupt the flow.

Crux is a very personal memoir exploring the raw feelings of the author. The point of view changes in the latter part of the book as Guerrero addresses her father. There is also a maturity and cohesion in that part of the book not present in the first. Perhaps that is appropriate as she was initially relating experiences as remembered from a child’s point of view. Readers who enjoy history will receive historical background to provide context; it is interesting and succinct.  All in all, Crux is a good read. There are very few heart-warming moments, but that was her life.

I would like to extend my thanks to netgalley.com and to One World (Random House) for giving me the opportunity to read this book in exchange for an honest review.

Notes: There are some sexually explicit portions and offensive language in Crux. The treatment of women is particularly disturbing.

Life was not turning out as we had hoped. Creativity was a crime. Innocent creatures were mortal. Fathers left their daughters and broke their mother’s heart.

I had grown accustomed to the idea of my father as dead. If he was dead, he wasn’t willfully ignoring us. This belief had become a sinister source of comfort.

He persisted without pausing for protest, the same anger he had directed at me when he was driving me to my riding lessons as a teenager. I stared at the table, steeling myself. The numbness came naturally—a habit of my adolescence. 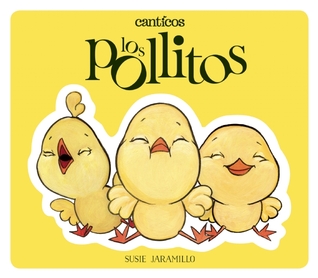 Susie Jaramillo is a bilingual mother and artist who grew up in Venezuela and in the United States. In working with her own young children, she found a need for bilingual books to share traditional Latin American nursery rhymes in Spanish with a translation into English which maintains the original meaning without sacrificing the beauty of language.  To this end she founded Canticos and has published the first book, Little Chickies/Los Pollitos. She has written and illustrated two more bilingual books which are available for preorder.

The art work in Little Chickies/Los Pollitos is very appealing. The simple storyline is that of a mother hen taking care of her babies. It is the kind of book children would love to read and sing over and over again.

One thing that makes Little Chickies/Los Pollitos valuable in working with preschoolers, in presenting an alternate language, is the accordion fold format.  You read the story all the way through in one language and then from the back you can go forward again reading in the other language with no disruption of the story or words that don’t match up with the voice.  Jaramillo added other features that make it special as well.  The rhymes are put to music so children can sing the book. They are interactive with spinning wheels and flaps that lift. An app can be purchased as an extension of the book.  There are free videos of it on Vimeo and more information is available at canticosworld.com.

I would like to extend my thanks to netgalley.com and to the publisher Encantos for giving me the opportunity to read this book in exchange for an honest review.