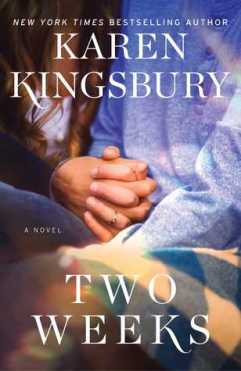 Elise is a budding artist, and Cole has a promising future as a doctor when they meet and their lives become intertwined during their last semester of high school. In Karen Kingsbury’s Two Weeks, these young people have to deal with their own pasts with single moms, their love for each other, and their relationship with God. An unplanned pregnancy, the loss of a child, and trust in God take center stage as Elise and Cole wrestle with major decisions that have wide ranging consequences.

Two Weeks is a romance but it also deals with the emotional and personal impacts of abortion outside of any political concerns. It also addresses the agony of miscarriages and infertility while holding up adoption as a difficult and complicated but positive possibility. This work of Christian fiction shines a light on a subject that is painful for many. It also examines parenthood from several viewpoints. Both topics may be sensitive for some readers, but I do recommend this work written by a prolific Christian author whose books have been made into movies.

I would like to extend my thanks to netgalley.com and to Howard Books for giving me the opportunity to read this book in exchange for an honest review.

Notes:   1. This book is the latest in an extensive series of books about the Baxter family. I read it as a standalone and had no problem following the plot.

2. There is a discussion guide at the end.

Ashley would do the most powerful thing she could. The best gift a mother could give her child. Grown or not. Now and forevermore like her life depended on it. She would pray.

Their lives were a trail of broken moments and closed doors when it came to having a baby.

“I never think of them as dead.” Her eyes grew softer. “They’re alive. They just have a new address in heaven.”

Goodness, Grace, and Me

Complicated relationships are at the center of Julie Houston’s Goodness, Grace, and Me. Harriet (Hat) has been best friends with Grace since they were eleven, and they both idolized Amanda who along the way picked up the title “Little Miss Goodness.” Twenty years later, Grace and Harriet  assume they are rid of her influence when she suddenly re-enters their lives. Despite all warnings, Harriet’s husband Nick becomes involved in business with Amanda’s husband and thus Amanda. Grace’s brother continues to be under Amanda’s spell.

Life is not easy for Harriet, mother of three, who had to return to teaching because of economic problems. Also Nick’s mother has come to live with them. Although her situation is complicated, Harriet pushes hard for stability for her family.

This is my second Julie Houston book to read and I like it much better than the first. The main character is strong, likable, and has moral character. There is a subplot involving Harriet’s mother, possible dementia, and a secret. I wasn’t sure how the plot would sort itself out, but it did and I enjoyed watching it happen.

I would like to extend my thanks to netgalley.com and to Aria for giving me the opportunity to read this book in exchange for an honest review.

Notes: Includes some British vulgarisms but they are not terribly offensive compared to those found in Julie Houston’s Coming Home to Holly Close Farm.

I can only ever sulk for a maximum of five minutes, by which time I’ve usually had enough of giving the cold shoulder treatment and need to start talking again. Life is just too short to spend it in silence.

Admittedly, I did most of the hard graft but I lightened the proceedings by blasting out T.Rex’s “I Love to Boogie”, so that even Kit forgot he was a fully paid up member of the moody brigade and jitterbugged round the furniture with the Hoover.

…wrapping a duvet around her against the almost damp cold which had settled in the sitting room like a melancholic maiden aunt who has outstayed her welcome, I went back through the hall to ring the doctor’s surgery.

You don’t have to have a good relationship with your mother or your child to enjoy Lynn Cahoon’s Mother’s Day Mayhem. This novella provides a quick, enjoyable, themed read. Lynn Cahoon is a big proponent of “sometimes, the family you make is just as strong or stronger than blood.” Another nice feature of this book is that although there are mysteries (where ARE those missing garden gnomes?), there are no murders.

I would like to extend my thanks to netgalley.com and to Kensington Books for giving me the opportunity to read this book in exchange for an honest review.

Notes: a novella in the Tourist Trap series

Life was good. Or it would have been if Greg hadn’t thrown a stone in the pond. Now, I had to deal with the ripples his request had caused.

“You’re never making a mistake by making yourself vulnerable. You’d regret it more if you didn’t take a chance.”

“Bite me,” the kid called back, speeding up even more. Greg sighed. “Not my circus, not my monkey. But if it was, that kid would be sitting in my office waiting for his folks to come and get him. Sometimes people need to know that respect is an important part of building a community.” 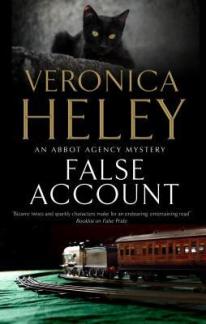 Bea Abbot is the owner of the Abbot Domestic Agency and has a talent and good reputation for choosing honest, hard working domestic employees and matching them up with suitable employers. In this mystery she is approached by the very wealthy Tredgolds, an elderly mother and her quite unlikeable daughter, to replace several employees.  Initially Bea wants to have nothing to do with them, but so many things seem out of whack that she decides to help. Two cats have been killed and several staff members dismissed for criminal behaviors. Mrs. Tredgold is a mystery herself appearing at times to be weak and at other times manipulative.

The plot of False Account by Veronica Heley is complicated and fast moving. More crimes occur, some putting Bea, her ex-husband Piers, and her ward Bernice in danger. Mrs. Tredgold’s family spends money as if there is a never ending supply and have developed a strong sense of entitlement which makes them unpleasant to be around. There are many surprises as the plot unwinds over the course of several chapters resulting in a quite satisfying conclusion.

I would like to extend my thanks to netgalley.com and to Severn House for giving me the opportunity to read this book in exchange for an honest review.

Notes: #12 in the Bea Abbot Agency Mystery Series. It could be read as a standalone, but would probably be enjoyed more having read others in the series. I have read 6 out of the 12 in the series, and there has never been a problem in keeping up with the characters.

Someone clunked a mug down on Bea’s bedside table. She realized it was time to wake up. She didn’t want to wake up. She might not have her eyes open yet but she already knew that a large black cloud was hanging over the day.

“The thing is, you can’t stop people being stupid, can you?”

“Is that bacon you’re cooking? I was thinking of going vegetarian but maybe I won’t start just yet.”